These islands and mainland areas are home to cacao farms, indigenous villages, and an endemic family of dolphins.

Off the beaten track, you will find the islands of Cristobal, Shepard, and the mainland shores of the “Darklands” named after its fertile soil. The fertile ground also happens to host cacao farms producing some of the famous chocolate that comes from the Bocas del Toro islands and mainland. You can take cacao tours, ride horses on the island paths, explore the local indigenous villages or go dolphin watching. This area of Bocas is home to a small coastal dolphin population consisting of around 100 that possess a variation in their DNA that is unique to them. This is because they do not move very much and pretty much stay here after birth, making them genetically isolated from other populations in the Caribbean.

Isla Cristobal was named after Christopher Columbus after he came to the Bocas del Toro islands on the 6th of October of the year 1502 on his fourth and last trip. Isla Shepard was named after the Shepard family during the beginning of the 19th century. Over the years both islands were deforested and used for farming, and today this area is popular for cacao farms.

Isla Cristobal, Isla Shepard and the Darklands are home to the indigenous Ngäbe. San Cristóbal, the main town on Isla Cristobal, is the perfect place to experience the culture that Bocas del Toro has to offer. A tourist spot is the Dolphin Bay to visit the dolphins living there.

How to Get to Isla Cristobal Area

Getting to this area of Bocas del Toro can be done by hiring a water taxi to take you. Most visitors to Dolphin Bay will stop by here on their way to other attractions. Cacao Farm tours and indigenous tours have to be organized ahead of time, and usually, tour operators include transportation as well.

Located a little further out from the main Bocas islands, this area of Bocas del Toro is safe, but like always, practice common sense by not leaving your personal items alone.

Mosquito repellent is a must. The chitras, tiny little biting flies that pack a wallop, have trouble getting through a layer of coconut oil. So stop by a local store to buy some and shine yourself up before hitting this area.

Bocas Adventure: The Panama Day Tour You Will Love

How fun does taking a boat ride to Tranquilo Bay Eco Adventure Lodge on Isla Bastimentos, exploring the trails onsite, climbing up the canopy observation tower, and spending the afternoon in the...

Where to Learn to Surf in Bocas del Toro

Blessed with both the Pacific Ocean to the west and the Caribbean Sea to the east, Panama is one of the top surfing destinations in Central America. It offers a wide array of options for all types... 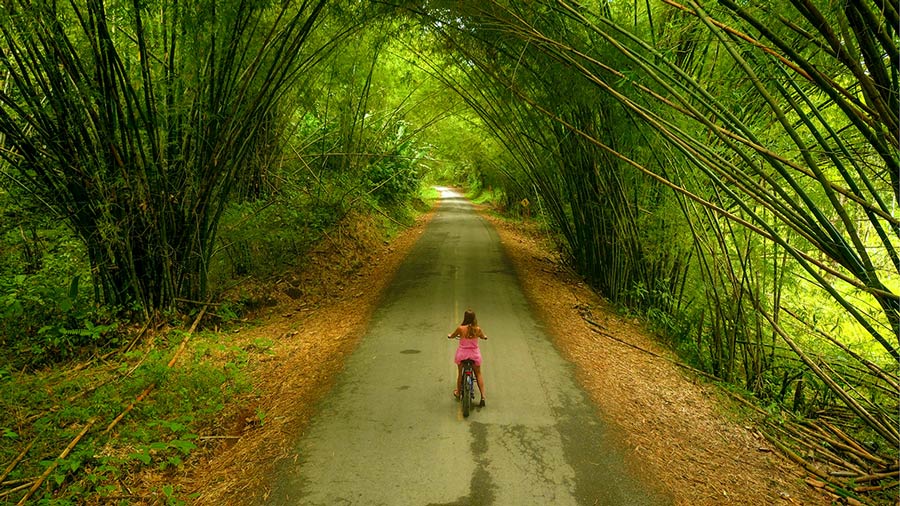 Renting a Bicycle on Isla Colon (And Where to Go)

Isla Colon is the Bocas del Toro archipelago's central hub and one of the few islands in this area with roads. On Isla Colon, you can find cars, trucks, and many, many bikes. Over the years, more...

So you got your airplane ticket, and you're coming to Panama for vacation. You have decided that you want to explore the islands of Bocas del Toro for one week, but you're not sure where to stay,...

Does Bocas del Toro Have a “Rainy Season”?

In Panama, there are only two seasons; dry and rainy. Lots of websites and travel books about visiting Panama tell you that the dry season is from December to March. But that isn't the case when it...

Bocas del Toro is a paddling paradise. No matter what canoe you decide to use, the Bocas del Toro islands offer several different spots where you can go exploring. Whether it's over colorful reefs...

Use the hashtag #islaCristobal on Instagram to be featured here!

Load More
This error message is only visible to WordPress admins